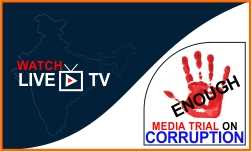 Today’s question focuses on the so-called corruption charges of the country, which are made public only for the temporary selfish benefits. Confused by these false accusations, the countrymen are not able to select a faultless administrator, which is fatal for democracy. Till date, many politicians and officials of the country have been accused of corruption, out of which only a few people have been punished, it means, not all were corrupt ! Can the social damage done to a person’s reputation in a media trial be proved to be restored in the same manner if the person is proved innocent by the court? Certainty not ! Then why are media discussions held on the basis of assumption in the case of the person concerned? Should not the justice administrators consider about a restriction on this unethical conduct of expression? In our society, the principle of judicial system has been proposed for all kinds of unethical practices. By bringing all kinds of statutory charges under the ambit of freedom of expression, a few people have been making aggressive presentation to the society by twisting the facts for their selfishness, which mislead and confuse the countrymen. Does this act not fall under the category of misguidance and conspiracy with the countrymen? Misleading and conspiracy is considered a crime in our constitution and it is considered punishable under the Code of Criminal Procedure, so why do not these unjust accusers get punished? Admittedly, freedom of expression is necessary in democracy, but it is also necessary to prove the allegation. If the constitutional rules and laws give us freedom of expression, then can the same rules and laws be considered legitimate to mislead and confuse the countrymen? Why is cognizance of such statements not taken under the category of crime? Today’s question related to these burning questions seems to be necessary for constitutional and social change that,

Is it the right statutory system to declare accusations from public forums?

If you agree with the question, why and what should be the changes? If you disagree then why?

Think, and write your opinion in limited words for the change in the nation and your society or do express your views by pressing the button of “agree and disagree”.

When the law has been established in the constitution of our society that if any person, institution, officer or any common countryman adopts illegal, immoral, corrupt or wicked conduct, then it has to be proved in the court under constitutional rules. Only the court has the right to convict a person, so why is public media trial of corruption and immoral character already discussed? In the name of expression, the social damage done by this media trial to the reputation of an innocent person remains a question mark in society for his entire life. Is this a right system operating in the society? In fact, the subject becomes that “unless a court convicts any countryman, there is no media trial on the allegations against that person” Shouldn’t this be the only legal system in law?

At present, this illegal tradition of expression is most used by politicians and political parties against their opposition, so that they can get votes in elections, Is this a true social depiction of democratic and constitutional values? No ! So first of all, we have to say clearly to the corrupt scammers that “First they present their facts in the court, the court should give decision on those facts in a limited time, only then the concerned will have the right to accuse them, not on shouting from public forums.” When a government employee can be arrested with legal aid for being corrupt, then why is this process not followed for politicians? Today, every countryman has been tired of hearing the news of corruption every day and nothing is proved legally. Most people have been found innocent in the legal decision that is visible on corruption cases in front of society today, so for what benefit Scream of corruption-corruption is heard from public forums every day? We have to think…. We have to write…. We have to change….!!!

Today it is right for the society that corruption cases first go to court and only after the court declares the accused, there should be a public discussion on that person, organization or institution, otherwise not. Adopting this tradition will end unbridled allegations from politics and society and clean democratic political competition will be visible and for the smooth functioning of this system, the judicial system has to pass a decision on the matter in a fast, i.e. limited days, (Many examples of this are visible in society.) so that the charges and the accused do not die. That’s why today’s question: Is it the right statutory system to declare accusations from public forums?  Is presented with all the respect to public table for discussion. Jay Hind…! Jay Bharat….!!!

Your views or suggestions may be useful on this issue. Please write down your views or suggestion in the comment box of the blogs or cast your vote. Your views/suggestions are forwarded to the high constitutional authorities of the nation. It might be that government may implement it by taking in consideration. With such hope, put your views. Thanking you.
150500cookie-checkMedia Trial on Corruptionno

This site uses Akismet to reduce spam. Learn how your comment data is processed.

ASK YOUR QUESTION TO NATION

Anyone can raise questions through this forum. Send us your question by contact page.

Blog Disclaimer:
This is a public blog. Any views or opinions do not represent those of people, institutions or organisations that the owner may or may not be associated with the professional or personal capacity, unless explicitly stated. Any views or opinions are not intended to malign any religion, region, cast & society, ethnic group, club, institutions, organization, company, individual or jointly.