Today’s question discusses the trauma displayed on the dreams of freedom fighters of independent India and its solution in public interest is presented in respect of it. We all know that our freedom fighters have struggled a lot against the British and have got freedom for us. There after we could get the opportunity to cherish our dreams. All the national leaders at that time and public participation together laid the foundation of our democratic society, in the base of this foundation all have written and repeated that there should be social equality and freedom amongst all country men. Are we successful in doing this? By rotating such a question, many more burning questions in the same context come in our minds, is our country free from all kinds of slavery? Have we succeeded in establishing the basic premise and verifying social equality? Have we fully enshrined the basic freedom of our basic freedom struggle in the society? your heart will answer, no!!! Even today, it seems that a few more steps have to be taken on this subject, in all sectors of the society, powerful groups have been formed due to which  ‘equality of opportunities’  in unable to get its complete position. Currently the burning example can be explained by the arguments going on, on the nepotism in the film industry. In proportion to our industrial areas of our country the film industry is a very small market, nevertheless some powerful groups have adopted the policy of discrimination by governing the market and marks a negative question on the roots and accuracy of our democracy. “If due to nepotism in our small industrial sector a talented countryman suicides, so in the several sectors of the country how many talented countrymen would be suffering due to this type of unethical behavior”. These facts and questions seem worthy to be considered. Is the correct definition of democracy being visible? Why is discrimination still existing in all sectors of the society? Why after so many years of freedom also we can’t get rid of malicious policies? Related to such burning questions, today’s question seems necessary for the constitutional and social change.

Dream of independent India : How is our democracy how it should be?

If you agree with the question, why and what should be the changes? If disagree then why?

Think, and write your opinion in limited words for the change in the nation and your society or do express your views by pressing the button of “agree and disagree”.

One of the merits of democracy is the “equality of opportunities”. Post-independence there has been development and progress in all sectors of our country. Along with this progress many of our countrymen have established their industrial, professional and political empires. Along with this progress many so called nationalists have raise the policy of nepotism. Like people were oppressed by the imperialists of the earlier time by adopting social inequality policies, even today a changed form of oppression is adopted by a few imperialist groups. That is why is seems important reassessment and analysis by the medium of those burning questions related to the current social policies and customs. Why are we unsuccessful in totally establishing the goal of democracy “live and let live” in our society?

Talents are born and developed by fair competition in the society. today in every field of the society enmity is growing along with the competition. Today, in the competition of a few eminent people of society, the greed for contempt has made democracy different from its true form, which is affecting the lives of common people. This difference has spoiled the nature of democracy in the society. Today, it is our duty to change this dirty form and bring democracy back to its original form, Which was imagined by all our freedom fighters. Should we not re-evaluate the established definitions for the overall success of democracy and create a new definition in society?

In our society, resentment also remains as long as the subject is burning, for example Anna movement aka Lokpal movement, Nirbhaya scandal, etc. etc. As soon as a little silence starts coming on the subject from society, the anger also starts to fade. Society reverts to its old trend, why? How long will we live with such momentary thoughts, we must change ourselves at some time, why can’t that change happen today? We have to think…. We have to write…. We have to change….!!!

Change is the rule of nature. Time is always moving rapidly, which even God himself cannot stop. These are great examples full of truth on earth for humans. In front of this one word, time, the vanity of man to be powerful, ends in a moment. No matter how powerful a person thinks himself to be, but time is spent tapping according to his norms. If every human being understands this fact then inequality from the country and the world will be destroyed automatically. For this, no country will ever need to make rules and laws, but for people associated with greed and ardent thinking, we feel clear the need for rules and laws. Therefore, we should seek to reform the democratic policies of the independent Indian nation, imagined by our freedom fighters, and establish the rulers of the country with change, according to the present environment. that’s why today’s question: Dream of Independent India: How is our democracy how it should be? Is presented to public table for discussion. Jay Hind…! Jay Bharat….!!! 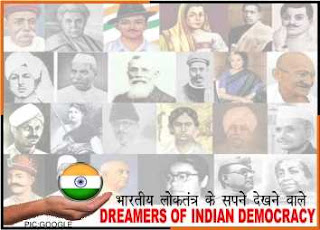 This site uses Akismet to reduce spam. Learn how your comment data is processed.

ASK YOUR QUESTION TO NATION

Anyone can raise questions through this forum. Send us your question by contact page.

Blog Disclaimer:
This is a public blog. Any views or opinions do not represent those of people, institutions or organisations that the owner may or may not be associated with the professional or personal capacity, unless explicitly stated. Any views or opinions are not intended to malign any religion, region, cast & society, ethnic group, club, institutions, organization, company, individual or jointly.